St. Edward Parish, first built as a small chapel in 1919, to server a community that flourished each summer, became a parish in 1953. In 1977, the existing parish center was dedicated. Under the patronage of St. Edward, the Confessor, the parish has united as a true family which is demonstrated in the care and concern shown to fellow parishioners.

Our Lady of Mt. Carmel — Berlin 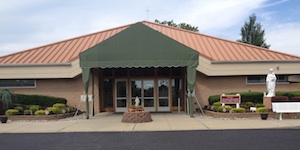 As early as 1880, a priest from the city of Camden, Father Michael Dilelsi, was assigned by Trenton Bishop McFaul to celebrate Mass each Sunday in what was then known as West Berlin. Mass was celebrated either in private homes or in the stable at the Old Tavern. At this time, most of the Catholics in the area were farmers of Italian heritage. When it had grown to 200 families in 1903, it became an established parish. Father Peter Paris was the first pastor. The parish was responsible during his years for Catholics in Blue Anchor, Waterford, Atco, and Gibbsboro. A new church was dedicated by Bishop McMahon of Trenton on October 4, 1931, located at Cedar Avenue and White Horse Pike. 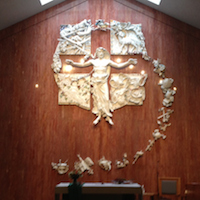 In 2006, Bishop Galante announced the formation of core teams to determine how parishes would merge. On November 4th, 2009, St. Simon Stock Parish was established. Our Lady of Mt. Carmel Parish in Berlin and St. Edward's Parish in Pine Hill merged to become one parish, St. Simon Stock.

Through the centuries our Catholic tradition has witnessed innumerable manifestations of art in the worship space. It is the agreement of variety that brings testimony to the infinite possibilities of art in the church community. The wall behind the altar in our church is a testament of this.

In creating this design, the artist wanted to connect faith of the community to symbols of faith. To accomplish this, parishioners were asked to supply tiles or glass, which was meaningful to them, from their homes. For example, glass dessert dishes and kitchen tiles were supplied. The artist then broke these items and incorporated them into the symbols created. Our symbols are plentiful. Our designs are meaningful. They are universal signs and symbols of our faith…

As a symbol of unity & perfection, the circle signifies the infinite with no beginning or end. The square, with its worldly connotations, symbolizes the temporal aspects of earthly existence. The equilateral triangle symbolizes the Trinity through the three equal parts joined in completion. The cross, which is left as a channel absent of physical form, represents the removal of death with the resurrected Christ. The cross within a circle, known as the cruciform nimbus, refers to our redemption through the cross and the Risen Christ. The spiral functions as: an armature both visually and physically, leading us into and out of the composition; a symbol of extension of the ongoing, never-ending act of creation; illumination of the twelve symbols of the apostles of Jesus Christ who go forth continually spreading the Word and work of salvation.

Central to this design is the figure of the Resurrected Christ superimposed on the empty space of the cross behind him. He is surrounded by representations of the Holy Trinity, Agnes Dei, the Lamb of Revelation, the Four Evangelists and the Holy Family.

Holy Trinity Panel: depicts the hand of God emerging from a cloud in the act of creation and benediction separating order for chaos, dividing light from darkness, “When the dazzling light of my presence passes by, I will put you in an opening in the rock and cover you with my hand until I have passed by” (Exodus 33:22.)

Agnus Dei (the Lamb) Panel: as creation is our entry into Scripture, Revelation is our re-entry into the new paradise with the second Adam, the Lamb of Revelation, “Then I looked and there was the Lamb standing on Mt. Zion.” (Rev. 14:1) The Lamb is harbored by a rainbow that extends from the hand of God, a reference to the rainbow after the Great Flood; it signifies the new peace. In Revelation John writes, “His face gleamed like precious stone of jasper and carnelian, and all around the throne was a rainbow the color of an emerald.” The four rivers that flow from the Lamb are the four rivers of paradise: the Gihon, Tigris, Pishon, and Euphrates. They flow from a single rock just as the four gospels flow from the single rock of Christ.

Four Evangelists Panel: the four evangelists are depicted from the vision of Ezekiel in the Old Testament: “At the center of the storm I saw what looked like four living creatures in human form. Two wings of each were spread out so that the creatures formed a square with their wing tips touching. When they moved, they moved as a group without turning their bodies. Each living creature had four different faces: a human face in front, a lion’s face at the right, a bull’s face at the left and an eagles’ face at the back” (1:5-6, 9-10.)

Holy Family Panel: emerges as a tableau depicting both the human and divine nature of Christ. As an infant his is being fed and nurtured physically by his devoted parents. He in turn feeds and nurtures us, his invited children, to his supper of Eucharist; hence, the angel bearing grain and the costal wound of Christ creating the vine from his blood.

The combined signs and symbols form a lexicon of our heritage in the faith of the now, the hope of the future.